Is Music Getting Louder?

Shopping at Kohl’s is always a dodgy proposition for many reasons, not the least of which is that I feel like the music playing overhead is assaulting me whenever I’m there. Though saying so may put me in the category of “cranky old man,” I can’t help feeling that the music in that store is just too loud — so loud, in fact, that I can rarely remember what I stopped in to buy in the first place. (Socks? Underpants? A new bow tie?)

The problem, of course, isn’t just isolated to the shopping experience at Kohl’s. Everywhere I go, I feel like music is louder than it used to be. And it turns out that I might be right — not just because someone in some back office is cranking up the volume on the in-store sound system, but because the nature of recorded music has changed.

I was working on some music of my own the other day when I decided to check the sound quality of my own work against the sound of another artist. So I picked a track called “Watching the Detectives” from Elvis Costello‘s My Aim Is True CD and loaded it into the program I use to record my own music (Adobe Audition). When Audition rendered the song visually, it looked like this: 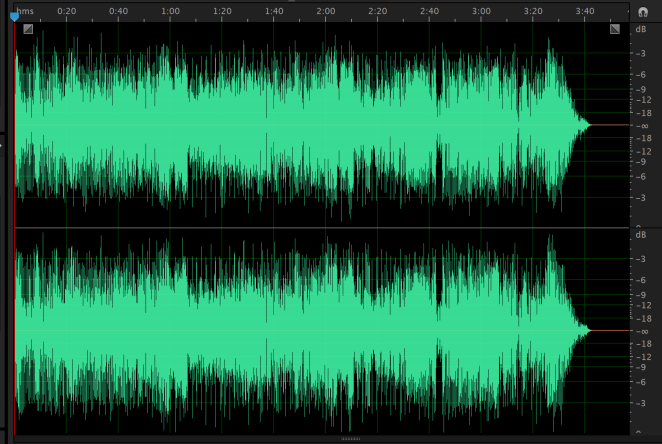 What you’re seeing in this image is essentially how loud the song sounds as it’s playing. The X-axis represents time, and the Y-axis represents amplitude or loudness. As you can see, the amplitude goes up and down a lot over the course of the song, and just past the 2:40 mark, you can see that the song gets quiet before getting loud again.

Musicians refer to this up and down movement as a reflection of musical dynamics, and the difference between the lowest low-point and the highest high-point can be described as a song’s “dynamic range.”

Dynamics lend drama to music. That’s why classical music scores include symbols that tell musicians to play quietly in some places and loudly in others.

The same goes for movie scores. Sometimes the sudden juxtaposition of loud and quiet music can add immensely to the atmosphere of a movie. Think, for example, of any scene in a horror movie just before a monster jumps out of the shadows… Quiet, foreboding music leading up to… LOUD SCARY MUSIC AT JUST THE RIGHT MOMENT!

All of this is to say that the Elvis Costello track illustrated above has a nice dynamic range that complements the mood of the song. It’s also worth noting that the song was originally recorded in 1976 in a fairly basic recording studio, and that the version above was digitized in 1993 for release as a CD from Rykodisc.

By way of contrast, let’s take a look at another track I used as a reference the last time I was working on some music. This one is a more-recently recorded song (2016) called “Gone Insane” by Lucius (another favorite of mine). One thing to keep in mind is that though the title might imply that it’s a crazy rocker a la Black Sabbath’s “Paranoid,” it’s actually a fairly poppy take on love gone wrong. Here’s what it looks like:

One thing you’ll notice if you compare this image to the first one is that (in line with my initial theory), it’s louder. The amplitude of the Elvis Costello track generally peaked at around -3 db (with a few peaks a little higher than that), and this one appears to be consistently peaking at or near 0 db.

Additionally, this track isn’t just louder. Its dynamics are different. Where the amplitude of the Elvis Costello track shifted considerably from one second to the next, the amplitude of this track stays consistently high. Granted, there are a few instances in the song where the dynamics shift dramatically and to good effect. The first is around the 1:10 mark, the second around 1:55, and the third for the stretch between 2:50 and 3:50. In fact, that dynamic shift in the middle gives the song a nice bit of dramatic tension before it shifts back to a higher amplitude in its final thirty seconds. Overall, though, the song’s amplitude stays consistently high.

When I saw the difference between these two tracks, I checked out another track, “Default” by Django Django, which was released in 2012. Here’s what it looked like:

Again, the amplitude and dynamics of this one are considerably different from those of the Elvis Costello track. Once again, we’re seeing consistently higher amplitude and shallower dynamics.

It’s probably safe to say that the music I’m hearing when I go to Kohl’s has been compressed — and probably compressed even more than the tracks by Lucius and Django Django that are illustrated above. In other words, music is actually getting louder.

One reason may be that the way we listen to music is changing. Back in 1993, when Rykodisc reissued Elvis Costello’s catalog, people mainly listened to CDs on home stereos, in their cars, or through headphones. These sound systems could handle music with a wide dynamic range fairly well.

Today, by way of contrast, people listen to music on a wider range of devices. While the iPod delivers music in much the same way as the Sony Walkman of old (i.e., through headphones), many people today listen to music on the tiny, tinny speakers built into their laptops, and others listen through the speakers built into their iPhones. My guess (and it’s only a guess) is that speakers like these aren’t great at handling highly dynamic music. As a result, the music needs to be compressed in order for it to sound as “present” as possible on today’s speakers.

I also wonder if advances in recording technology have allowed sound engineers to apply compression more liberally than they used to. My thinking is that older recordings (like “Watching the Detectives”) were made on analog tape machines, and that a certain degree of residual “tape hiss” made its way into those recordings. If a sound engineer applied too much compression, that hiss would be audible, but left at low levels, nobody would notice.

By way of contrast, today’s recordings are made digitally, so there’s no tape hiss. What’s more, sound editing programs make it fairly easy to eliminate unwanted noises, which means that sound engineers can compress the heck out of recordings without worrying that those unwanted noises will end up on the songs they’re producing. So if the goal is to make louder music that will sound good on a wider range of devices, there’s no reason not to use compression — other than the fact that too much of it can crush the dynamics of a song.

Again, these are only theories, so if anyone can shed light on any of this, please let me know! Based on what I’m seeing in these images, though, I can say with relative certainty that I’m not being paranoid…

The music in Kohl’s really is assaulting me!

7 thoughts on “Is Music Getting Louder?”