I’m auditing a music business course this semester, and there was a longish assignment due earlier today along with a presentation. Here’s what I came up with…

Early in the semester, the professor, Mike Kelly, posted a short piece that Bob Lefsetz wrote about artists. It started by saying that an artist doesn’t give an audience what it wants, isn’t in it for the money, is not a member of the group, and lives for feedback but hates that they do. All of this describes me more or less perfectly, especially the last point.

I’m also cool with all of the other stuff he says in that short piece, especially the idea that an artist isn’t entitled to an income but sill needs an audience in order to be relevant. That’s essentially where I find myself in relation to the music business—not expecting or even especially wanting to make any money at it but nonetheless wanting to find the audience that will like my music.

Also, I’m kind of a cheapskate. So even though I’m not looking to make any money in the business, I’m also trying to mitigate my losses as much as possible. Here’s how I’m making that happen…

As ill-advised as it may seem, I’m not using my own name. I made a decent reputation as an indie writer some years ago, but I’m throwing all of that away and starting from scratch and going by the name Zapatero. It’s my last name in Spanish. I discovered this fact in a used book shop in West Chester about fifteen years ago. Here’s an image I’m using as a kind of logo: 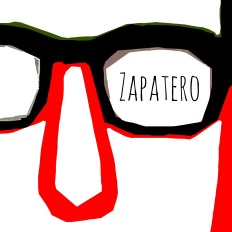 At this point, “the product” is an indie Lo-Fi electronic EP that I released at the end of April. It’s called Garden Variety and consists of five songs: 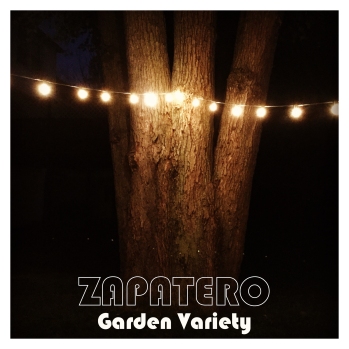 Getting the Product “Out There”

This is where the copyright part of the course came in handy. I ended up copyrighting the five songs on the EP as a collection. That cost $55. I also joined BMI, which was free, and then I registered the songs with them as well. Then I used a service called DistroKid to get the song in various online outlets like iTunes, Spotify, Amazon, and YouTube.

Basically, DistroKid charges a flat fee per year, so an artist can put out an unlimited amount of material each year for $20. So to make this investment worthwhile, I should start putting out more material.

The real expense is the copyright fee. There’s no limit to how many songs a person can copyright at a single time, so what I should have done was copyright all of the songs I’ve written and recorded over the past five years or so as unpublished works. Then I’d be able to sort them into separate collections and put them out without paying the copyright fee each time. Oh well. Live and learn.

Most of my promotion knowledge comes from my days as an indie book author. Back then, I’d find out which blogs and journals did reviews of books like mine and interviewed authors like me, and I’d get in touch with them. So I did the same thing with my EP. To date, I’ve gotten two reviews, which I’ve featured prominently on my website. One of the reviews also clued me into which genre I’m working in: Lo-Fi. Which makes sense because I’m always asking myself how Beck would approach any given song I’m working on.

In addition to continuing to seek out music blogs that might review my EP or individual tracks from it, I’m trying to redevelop my web presence. To this end, I did the following:

The ultimate goal at this point is to establish a foothold, and the main thing tying everything together in terms of promotion is the tree image from the album cover. It’s also the image in the background of my website.

The goal is to reach an audience that’s about the same size as the audience my books have reached. The trouble is that I don’t have exact numbers for the books. If I had to put a dollar amount on “success” at the moment, it would be enough to recoup all of the money I’ve spent so far. So we’re looking at $115.88.

So far, it’s tough to say how close I am to reaching either of my goals. I appear to be getting a few listens a day on BandCamp, but only two people have downloaded the EP so far. A couple of people have told me that they bought it on iTunes or elsewhere, but there’s a two- to three-month lag between sales and payments. Then again, even if everyone who told me they bought the EP actually did, we’re looking at a total of about $10, which puts me at about $105.88 away from my goal.

I’m working on a live set so I can play out at a few local venues. At the moment, this involves figuring out how to use Reason to control some external synths, which isn’t hard, just a pain to set up. Not sure whether I’ll ask my robot friends to join me, but I probably will since they work for free and seem to enjoy dressing like robots.

I also started working on my next collection of music. I have a couple of weird tunes that might fit together as another EP—“Sweet Chocolate Jesus” and “Spongecake.” If I write a few other songs along these lines, I’ll make it a dessert-themed EP. I’ll try to get this one done before the end of summer. Then I’ll start working on another one that’s a little punkier and synthier. This time around, though, I think I’ll try to copyright as many songs as I can in a single go. That’s turning out to be the biggest expense.

Somewhere down the line, I might think about starting a label. I have a few friends who’ve written and recorded some good material. After I get a little more experience getting my own music out into the world, I might ask them if they’d like me to get their songs out as well. I’m thinking three or four acts at most.

Part of the assignment was to create a timeline for our business goals. Since I’m a teacher and we’re in the middle of finals, here’s what my timeline looks like: